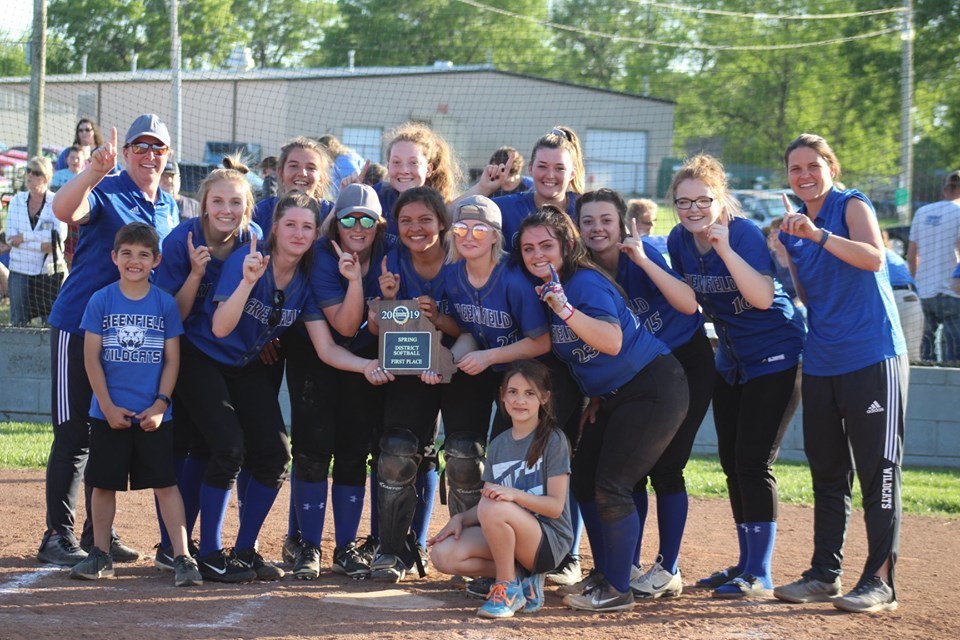 On a day that seemed unwilling to arrive, destiny could not be avoided for the Greenfield Lady Wildcats Softball team on Sunday, May 5. The Lady Wildcats captured the school's first ever softball district title in a thrilling 8-6 victory over the Jasper Eagles.

The Lady Wildcats were the fifth seed in District 12 and were not only underdogs, but had to face strange circumstances and crazy weather in route to their championship. Greenfield defeated 4th seeded Lockwood 15-3 on Monday, April 29th in the first round. When Stockton's bus was rear-ended and forced a delay until Wednesday, the Lady Cats did not play again until Thursday against the top-seeded and host Liberal Lady Bulldogs. Playing a week removed from 13-3 victory, the Lady Cats prevailed as underdogs again, defeating the host Bulldogs 8-2 for a potential date with destiny. Friday's championship was rained out and moved until 5:00 pm on Sunday.

Playing after the graduation for Liberal, the Lady Cats got off to a rocky start. Greenfield went three up, three down in the top of the first. Jasper used that momentum to take an early lead 2-0 going into the second. Senior Kiarra Mai responded with a lead off double to centerfield off the wall to begin the second. Mai later scored to put the Lady Cats on the board. The Eagles went down on three pitches to move the game to the third inning.

The third inning was the big one for the Lady Cats as the inning was started when juniors Aubrey Davis and Adriauna Wallen reached base safely. Sophomore Morgan Wright followed them with a single to the load the bases. With one out, Lauren Jones had the big hit as she doubled to clear the bases. After an intentional walk to Mai, senior Rendie Burns singled to bring in Jones to make the score 5-2.

The bottom of the third appeared to be a potential big inning for Jasper as the Eagles loaded the bases with no outs. Jasper scored a run after a failed throw to get a runner out at home. With one out, a soft line drive fell in front of the Wright on the infield. In an order of strange events, Wright threw the ball home for a force out, but Mai was not on home plate. Mai threw the ball to first baseman Davis who tagged out a retreating runner at first. Davis returned fire home where Mai tagged out the runner coming home for the odd book scoring of a 6-2-3-2 double play!

Greenfield scored two more runs in the fifth behind RBI singles from sophomore Jaden Baker and Davis to make the score 7-3. Greenfield finished their scoring in the top of the 6th when Mai and Burns hit back to back 2 out doubles to plate an eighth run.

Jasper tried to mount a comeback with a solo home run in the 6th and two runs in the 7th. However, Burns ended the final Eagle rally as she induced a flyball to senior Lauren Jones to secure the victory for the Lady Wildcats.

Rendie Burns earned the win for the Lady Wildcats, going 7 innings in the victory, while adding 2 hits and 2 runs batted in. Kiarra Mai was 2-3 with two doubles and 2 runs scored. Lauren Jones had a 3 run double, as Wallen secured a 2 hit game as well. The Lady Wildcats are coached by Melissa Hull and Jennifer Roberts.

The Lady Wildcats will have a quick turnaround with playing Mt. Vernon on Monday, May 6th in Mt. Vernon at 4:00 pm in the sectional round.