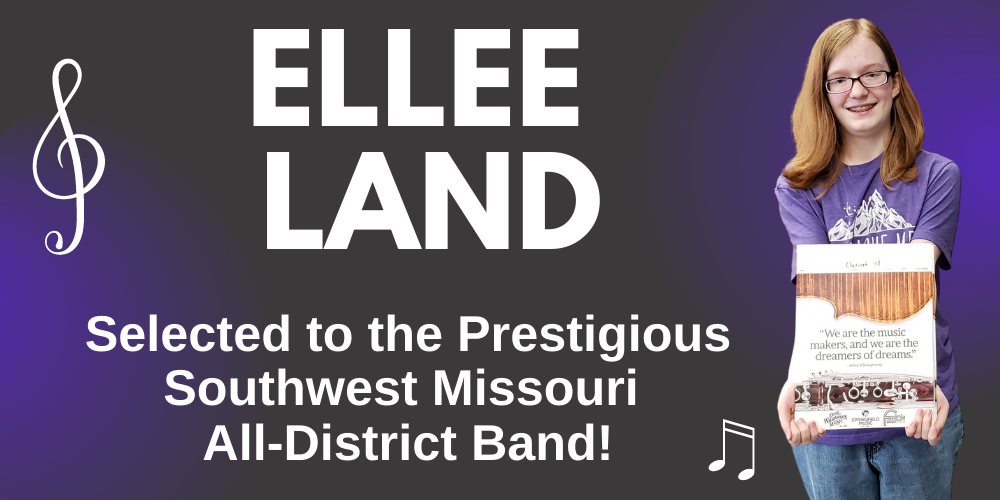 Greenfield High School senior Ellee Land was selected to be part of the Southwest Missouri All-District band.  Band students from across Southwest Missouri went through a rigorous audition process on November 2, 2021 at Carthage High School.  Auditions consisted of three prepared etudes selected by the Missouri Bandmasters Association, a major scale, minor scale and chromatic scale.  Selection into this band is a prestigious honor awarded to a very small percentage of band students in the region.  Being selected to the All-District Band qualifies Ellee to audition for the Missouri All-State Band. The All-District Band will perform on January 8, 2022 at 4:30 p.m. at Joplin High School under the direction of Sharon Toulouse of the University of Kansas.  Students prepare at their home schools for the performance prior to the day of the concert, then have two days of rehearsal with the full ensemble and conductor.  Sharon Toulouse works with the KU Marching Jayhawks, trains the KU Drum Majors, directs the KU Men’s Basketball Band and the KU University Band.  More information about the All-District Band including a full roster can be found at http://www.swmmea.net/high-school-band.html. Ellee is under the direction of Mr. Dalton Elery at Greenfield High School.