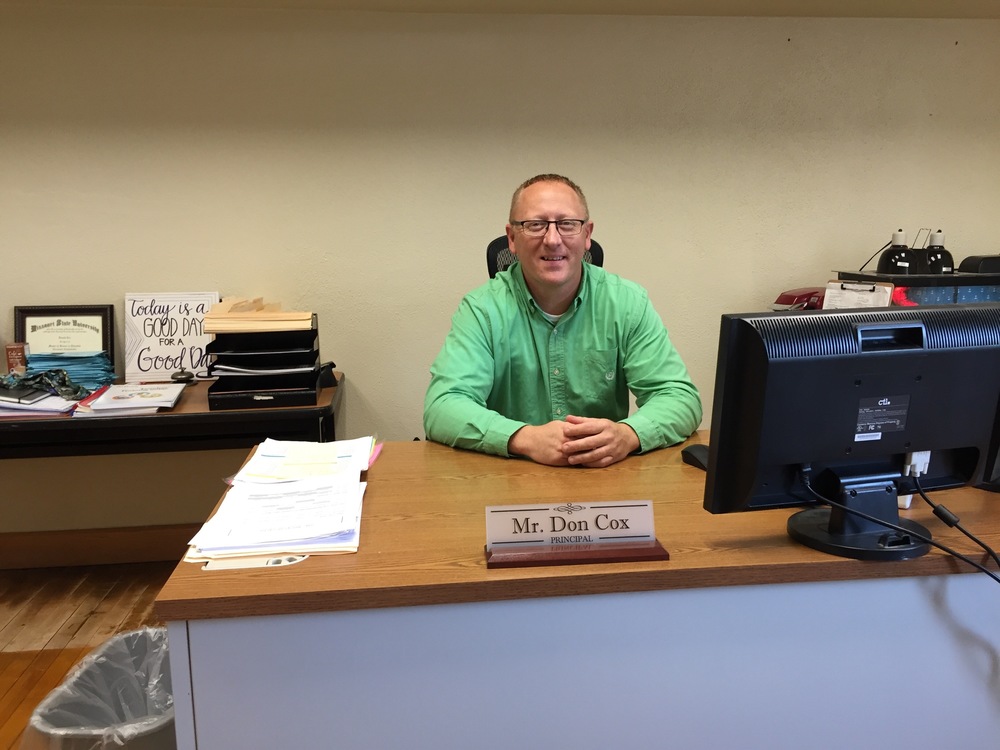 With the start of the 2018-19 school year, Greenfield Elementary School welcomed a new principal, Mr. Don Cox to the district's administrative team. Last spring, an opening was created within the elementary school when Dr. Kell accepted the district's superintendent position.  To fill the principal opening, a selection committee of teachers interviewed many qualified applicants, with committee feeling that Mr. Cox was the best applicant to move the elementary school forward.  After a second interview with the school board, Mr. Cox was selected as the next principal for Greenfield Elementary.

Mr. Cox was raised in Seneca, Missouri where family, friends and traditional values were very important to him and his family.  As a student at Seneca, Mr. Cox participated in marching and jazz band, enjoyed playing sports and was proud to be a Seneca Indian.  Upon graduation in 1994, he enrolled at Crowder College, where he graduated with a degree in Fire Science.

For the next twelve years, Mr. Cox worked for the city of Joplin as a firefighter and an EMS.  It was during this time, he turned his attention towards education, obtaining a Missouri Instructors License from the University of Missouri and accepting a position as an adjunct instructor with Missouri Southern State University.  In 2011 he turned his attention towards public education, completing a Bachelor's of Science in Education.  While working in the Carthage School District, Mr. Cox began work on a degree in administration, graduating in 2015 from Missouri State University with a Master's in Educational Administration.

As he steps into his first administrative position, Mr. Cox expressed how thankful he is  getting this opportunity by saying, "I have been fortunate enough to be a Captain with the Joplin Fire Department, teach adult education at MSSU, as well as teach math, science, reading and social studies in a 5th grade classroom.  I believe in setting high expectations for children and students through positive learning experiences.  I believe community involvement and real-world educational experiences are two necessary elements for successful graduates."

Mr. Cox recently celebrated 20 years of marriage with is wife Ashley, who is beginning her 14th year as a 2nd grade teacher in the Webb City School District.  Together, they have two daughters, Madalyn and Emma, who attend high school and middle school in Webb City.