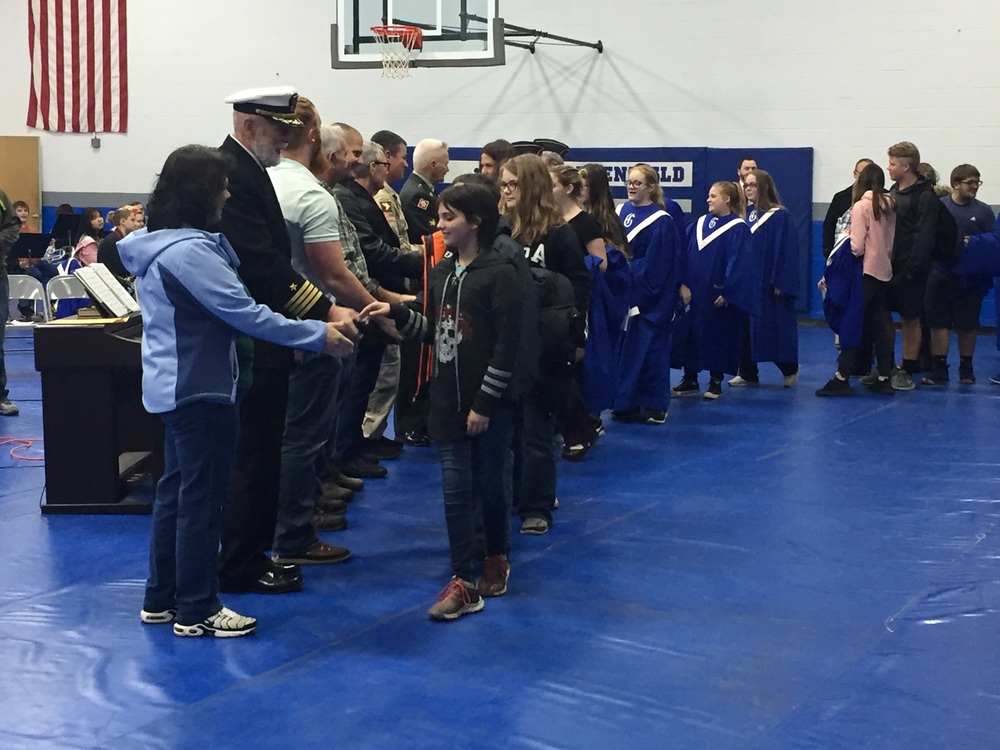 On Monday, November 12th, the Greenfield R-4 School District paid tribute to the Veterans of Greenfield and Dade County. The annual event had a great turnout considering the early snowfall the area received that morning with sixteen veterans being in attendance, numerous community members, and students in grades five through twelve. The celebration was highlighted by the Greenfield band and choir preforming patriotic songs, two student essay contest winners, and two guest speakers, Jim Johnson and Jack Pugh.

The essay contest winners were freshman Preston Larkin and junior Kylee Daniel. The essays were written over the importance of celebrating Veterans Day and what a hero is to them. Our two guest speakers this year were two Veterans within the Greenfield community in Jim Johnson and Jack Pugh. Mr. Johnson served in the Army and spoke on what a hero is to him, about his experiences during his service time, along with the lessons learned through the Army, and why a citizen should serve, and the benefits associated with it.

Our second guest speaker was Captain Jack Pugh. Captain Pugh served in the Navy for 25 years about destroyers, cruisers, and air craft carriers. One assignment he had during his time of service was being the Special Assistant to the Chief of Naval Operations. During his speech, he spoke on his time during service and how the others he served with would pick each other up during times of need. Captain Pugh emphasized how anyone can be a hero. He mentioned how the students of Greenfield can be heroes by sticking up for what they believe in and sticking up for each other.

Band director Annelise Dale had this to say about the assembly, “Our Veteran's Day assembly was a wonderful opportunity for our school community to recognize the sacrifice and achievement of our local veterans. Our music students did a great job honoring them through song, and I enjoyed the opportunity to teach patriotic music in such a focused way.   I am proud to be part of a school community that honors and respects its veterans.”

Following the assembly, the Veterans and their families were treated to cookies and drinks provided by the school district to show our appreciation for those in attendance. The school district would like to give a special thanks to the Greenfield American Legion for the presentation of the flags, Jim Johnson and Jack Pugh for their inspiring speeches, and all Veterans who were in attendance and all those who served.