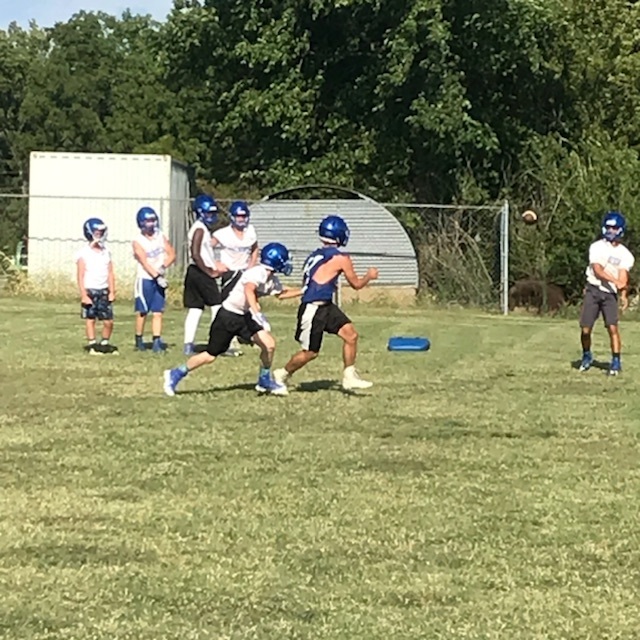 11-Man Football is Back!

Football is back! With the start of the 2018 football season, Greenfield R-IV is giving the community something they have been wanting for the last four years, an 11-Man football team.  A few years ago, football in Greenfield did not look too promising.  Numbers had dropped to a point where fielding an 11-Man team was not possible.  When facing the decision of not playing football, Greenfield's School Board made a tough decision and moved to field an 8-Man football team.

The first year of 8-Man football was difficult, with very little success on the field.  However, as student interest increased, so did their level of play.  Within a couple of years, the roster doubled from around 10 players to nearly 20.  Last year the football team's roster numbered in the mid-twenties, each Friday night.  With the football team being able to compete for district championships and with coaches seeing an increase in participation, the desire to move back towards 11-Man football was evident among community members.

As football makes its return to an 11-Man schedule, the district is entrusting its program to first year coach, Justin Breedlove.  With his roster numbering around 27 active players to start the season, Coach Breedlove has a roster that he can work with.  Coach Breedlove is not just looking to play 11-Man football, he is looking to compete and to build a program.

When asked about his expectations for the upcoming season, Coach Breedlove had the following to say, "Going back to 11 man from 8 man does present a challenge for our team, but so far the kids have adjusted very well. This year our strength is going to be in our skill positions. We have some players who can flat out run.  Using the speed of these players to get to the outside and make defenders miss will be a big part of our offense.  Overall I think it’s going to be a fun year, with a lot of opportunities to learn.  Not only for the players but also for myself as a coach."