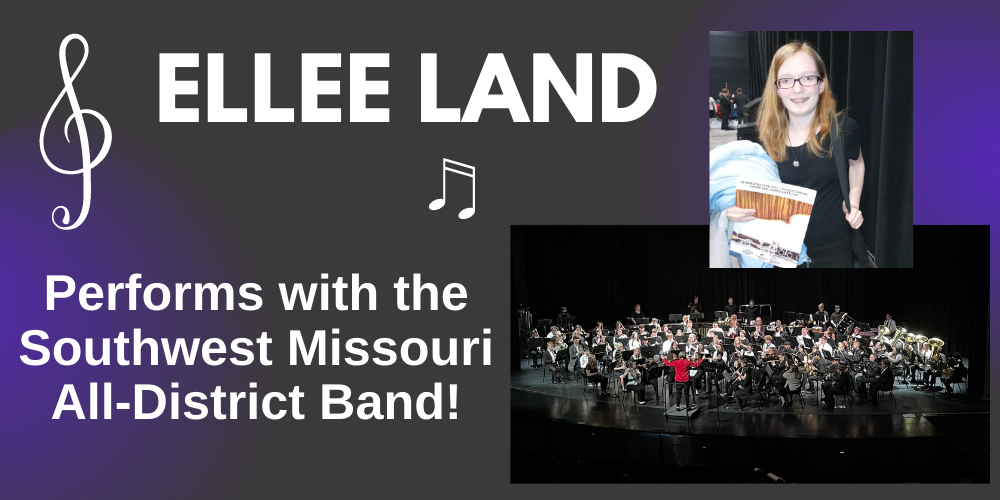 Greenfield Senior Ellee Land participated in the Southwest Missouri All-District Band performance on Saturday, January 8, 2022.  Students from the Southwest region were chosen by blind audition in November.  After being chosen, students were given folders with their music to practice individually until coming together for two days of rehearsals and a performance as an ensemble.  For many students, this was their first time rehearsing and performing with a full-size ensemble. They rehearsed for several hours on Friday and Saturday before Saturday’s performance.  Directing the band was clinician Mrs. Sharon Toulouse, Assistant Director of Bands at the University of Kansas. In her rehearsals, Ellee received collegiate-level rehearsal instruction. The ensemble also had the opportunity to speak to the composer of one of the pieces they played, so they got details and information from the person who wrote the music.

Ellee is under the direction of Mr. Dalton Elery at Greenfield High School.  Regarding her musicianship and general aptitude as a student, he remarks, “Ellee is a fantastic musician who is always eager to learn and play music. Ellee even composes her own music, which is well above and beyond what you would expect from a high school band student. She has extraordinary talent on the clarinet and is a leader in the Greenfield Band.”

Recalling the experience, Ellee Land reflects, “If I could say one thing about All-District Band, it would be that it's an experience anyone who wants to go into music, or even just do music in college should have. It's amazing, the quality of sound a band like that has, not to mention its size. I think the part that stood out the most was the first time we were warming up and tuning, it just hit me how awesome the whole group sounded. It was loads of fun.”

After graduating GHS, Ellee plans to continue with music.  She is currently undecided on a college major, however she states that music education is an option she may pursue.